In preparation for Thanksgiving I hunted around the internet looking for a story I could tell my daughters that related to thanks and gratitude. I found The Thankful Coat written by Karen Harvey Cox on her blog Children's Writings. (Karen's blog is filled with her original short stories for children, as well as her artwork. The stories cover a variety of topics and are great for storytelling.) I knew when I read the story that my daughters would love it. It was simple, interesting and has a wonderful message that goes beyond just one day of thanksgiving: the more thankful we are, the more happy we become. I have included the story below and also some photos of how we made our own simple Thankful Coat. 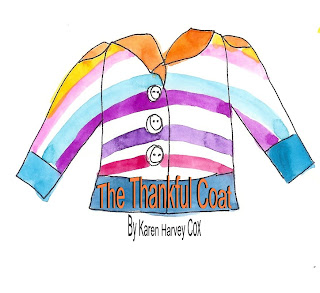 Once upon a time there was a little boy named David. David had a very nice family, and he lived in a very nice house. David had a fun little sister, named Sally and a wonderful dog named Rusty. He had nice toys to play with and he went to the very best school. There was just one thing that David did not have, he did know how to be happy. Nothing seemed to make David smile, no matter what his mother, father, sister and even Rusty did, David was always unhappy. One day David was sitting on his swing in the backyard feeling sad. A little girl walked right into his yard and walked up to him and said, “Hi, my name is Sandy, have you seen the Thankful Coat around here?” David thought for a moment and said, “A Thankful Coat, I never heard of anything called a Thankful Coat. No, I haven’t seen one around here. What exactly does one look like anyway?” “Well”, said the little girl. “It is the most wonderful coat in the whole world. It makes you feel happy when you wear it.” David asked, “What color is it?” “Oh, it is the color of the rainbow”, said Sandy. “Come on, let’s look together to see if we can find it and then you’ll know what one looks like!” So Sandy and David looked everywhere. They looked behind the house. They looked behind the bushes. They looked all over the backyard. They looked and looked and looked. Suddenly, they heard such a commotion. All the birds, bees, bunnies, squirrels, butterflies, chipmunks, and even David’s dog Rusty were gathered around a large oak tree. There it was hung on one single branch of the oak tree…a beautiful coat. It was the color of a rainbow, just like Sandy had told him. The animals made beautiful sounds that sounded just like lovely music. “See David, here it is the Thankful Coat”, said Sandy. “Come on, let me put it on you and you’ll see it will make you feel happy.” So, David held out his arms while Sandy slid the coat over his shoulders and then he put one arm in one sleeve and then the other. David said, “Gee this coat feels nice, and I feel better, Sandy.” David felt very thankful all of a sudden. David was thankful for the beautiful blue sky. David was thankful for his new friend Sandy. David was thankful for his fun dog Rusty. David was thankful for his family. David just felt very thankful. The more thankful David became, the happier he felt. The happier he became the bigger his smile grew. David’s smile grew bigger, and bigger and bigger. Happy Thoughts popped up everywhere in David’s mind. David had found the secret to happiness, to wear the Thankful Coat. David was especially thankful to Sandy. “Sandy, thank you so much for this coat, I feel happy for the very first time in a very long time.” Sandy looked at David and said “I must leave now David, so that I can bring this coat to other unhappy children.” “What?” David said in disbelief. “How can you take this coat away, Sandy, I don’t want to go back to being unhappy.” Sandy started to smile and said, “Why David now that you know the secret to happiness is being thankful, you can make your own Thankful Coat to wear every day. Your Thankful Coat can be an imaginary one and you can make it any color you would like it to be. Every day when you get up you put on your imaginary coat and start to think of all the things that you are thankful for and you will be happy. David thought for a minute and he said, “I think my thankful coat would be blue with gold buttons.” Sandy said, “Now isn’t that fun?” Tomorrow morning you will get up out of bed and put on your imaginary Thankful Coat and think about all the things that you have to be thankful for, and you will be as happy as you are this very minute.” Sandy hugged David and said, “Goodbye, David I am so glad that you have the secret to being happy now.” David said, “Sandy I am so glad that you found the Thankful Coat and that you taught me how to make one of my own.” After Sandy left, David got out some paper, pencils and crayons. He drew a picture of a coat and colored it blue and made the buttons gold. He hung the picture in his room. The next morning David got out of bed, he looked over at his drawing hung on the wall, and he put on his imaginary Thankful Coat. To his happy surprise he started to feel happy. The more thankful he became the happier he felt. David’s smile got bigger, and bigger and bigger. David’s life became full of happiness and he remained happy for the rest of his thankful days.

I read The Thankful Coat to my daughters out loud before our painting time on our painting day. After finishing the story I presented the watercolor paper cutout in the shape of a coat. I explained that we were going to make our own Thankful Coat just like in the story. 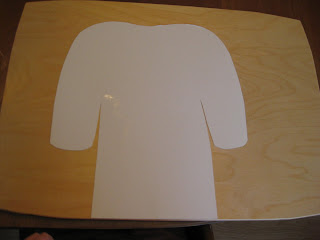 We thoughtfully painted the coats. Each of my daughters wanted to make a rainbow coat just like the one Sandy had. After they dried we decided they needed buttons too. We glued on silver buttons (tinfoil circles) onto the Thankful Coats. 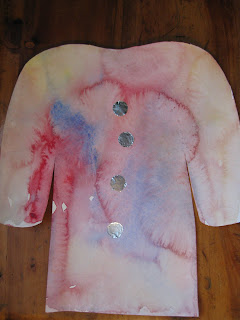 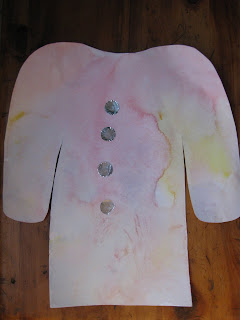 Our Thankful Coats now hang in a spot where we can see them and be reminded of how being thankful everyday can help us be happy. 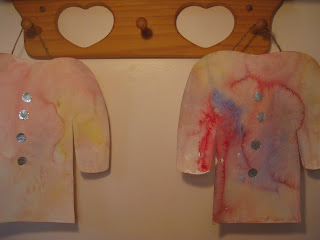 Thank you to Karen for writing and sharing her stories and for her allowing me to share The Thankful Coat here.
at 11/23/2010

I like the story too and your coats look great.

Be thankful for all you have, because you never know what happen next. See the link below for more info.