Hello thanks for visiting this blog.  I have been back and forth for months on whether to continue blogging and I've recently decided it is time to close this space.  I will continue to leave up the blog as a resource for others but due to many changes and reasons I won't be here to monitor or add to it.  I will still be on pinterest! Best wishes to all, Amy
at 4/11/2013 213 comments:

I found this idea for colored hard boiled eggs on pinterest and wanted to test it out with my daughters before using it with my preschool group this week for snack.  It was a lot of fun and my daughters loved the results. 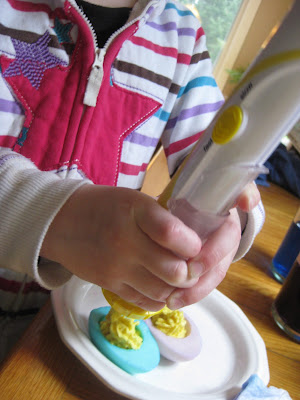 I hard boiled the eggs ahead of time (and prepared some for the preschool group as well).  After they were shelled we cut them in half and removed the yolk.  Next,  my daughters chose what colors they wanted (two each) and we prepared the glasses of water. 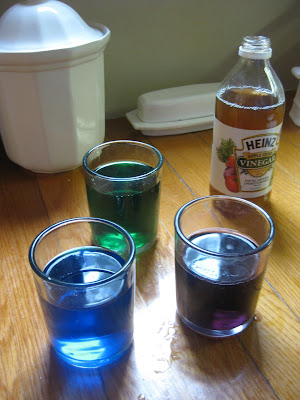 Some drops of food coloring, a teaspoon of cider vinegar and water was all that was needed.  After we stirred it in the glass, my daughters dropped in one half of the egg in each color.  It only took a few minutes before the eggs were colored.  While we waited we prepared the deviled yolk. 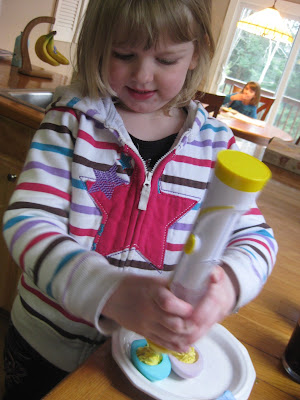 We used our fancy frosting decorating pen to put the deviled yolk back in the egg.  Pretty and fun!
We will do this activity this week for snack in the preschool room.  I know everyone will love it.

Here is a quick version of the story: 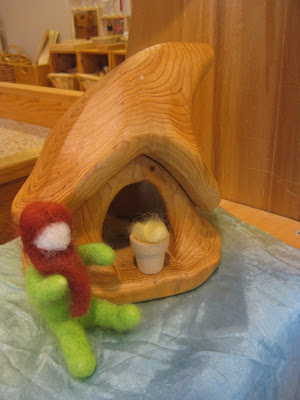 One day a little leprechaun named Lucky, was admiring the pot of gold he had been collecting for a long time.  He had been keeping it safe in his home but began to worry that someone might find it and try to take it away. 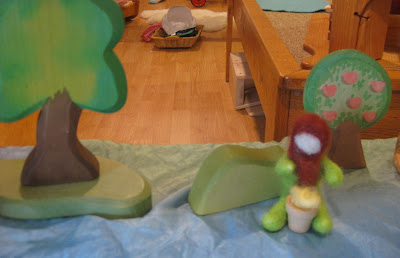 Lucky took a walk to the woods where he looked around for the perfect hiding spot for his gold.  He saw a tall oak tree and decided he would hide his gold in the earth under the tree. 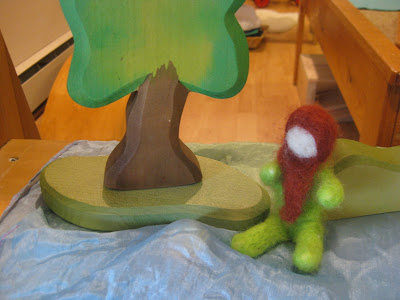 After his pot of gold was buried, Lucky felt his gold was safe and now no one would find it. 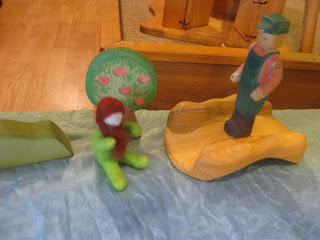 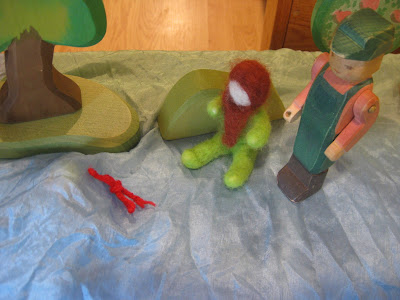 "You are right, Woodsman.  You did catch me and so now I must show you where I keep my pot of gold.  Here. I have buried it in the earth right here."  "Hooray", danced the Woodsman. Now I will have all of the gold I need."  "But, wait, dear Woodsman," said Lucky.  How will you dig out the buried gold?  You do not have a shovel?"  "You are right," said the Woodsman.  "Here, I will mark the spot of the buried gold with a red bow. Then, when I return, I will know exactly where the gold is buried."  The Woodsman laid the bow on the ground and set off to get his shovel. 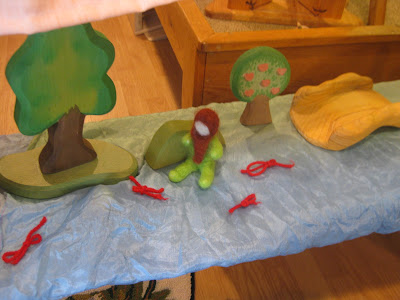 "Ha, ha," chuckled Lucky as he quickly tied many more red bows and laid them on the ground.  Lucky tied and tied until the whole forest floor was covered with red ribbons. 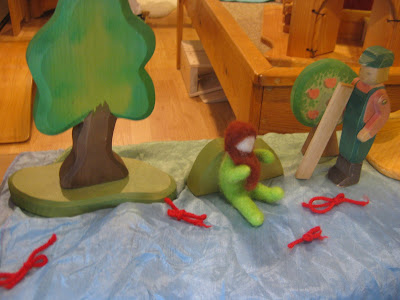 When the Woodsman returned with his shovel he couldn't believe his eyes.  The whole forest was covered with red bows.  "Now how do I  know where to dig?" he shouted. 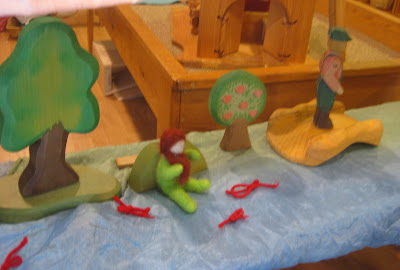 The Woodsman could not remember where the gold was anymore, there were too many bows.  He stomped off back towards his house while Lucky the leprechaun laughed at the trick he had used to keep his gold safe.

After I preformed the puppet show, I left out all of the pieces for the children to reenact the story.  They all loved the story and it has been used for two days, as well as an inspiration for various other puppet shows, too.

A place to create

I recently found a great deal on a Melissa and Doug workbench for kids.  The idea of a workbench was appealing but I wanted to use this workbench as a place for creating with all sorts of materials. 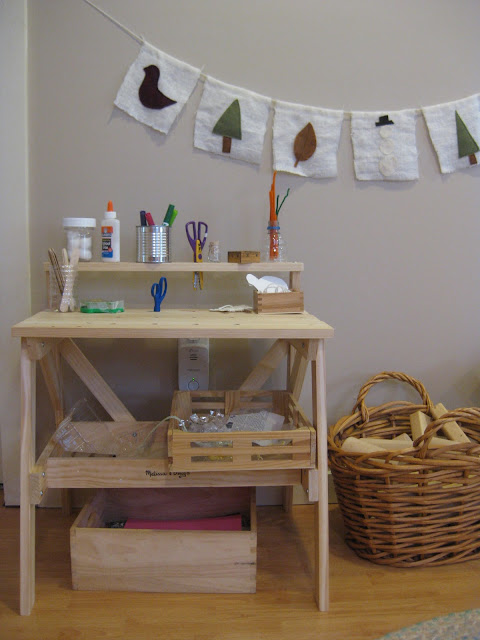 The workbench is dedicated for creating and offers a variety of recycled and everyday materials for use in whatever way imaginable.  I envision it someday covered with markings and wear, showing evidence of projects past.  I want it to be a place where creativity comes first and making a mess isn't a concern. 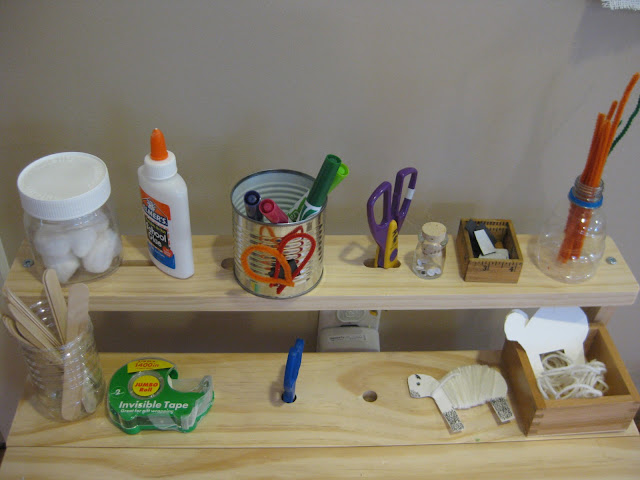 Because I plan to stock it full of recycled materials for creating, I wanted to use some of these materials for organizing as an example of thinking "outside the box".  This shelf contains cotton balls, glue, markers, decorative edge scissors, google eyes, magnetic tape, pipe cleaners, popsicle sticks, tape, regular scissors, and left over craft projects to complete. 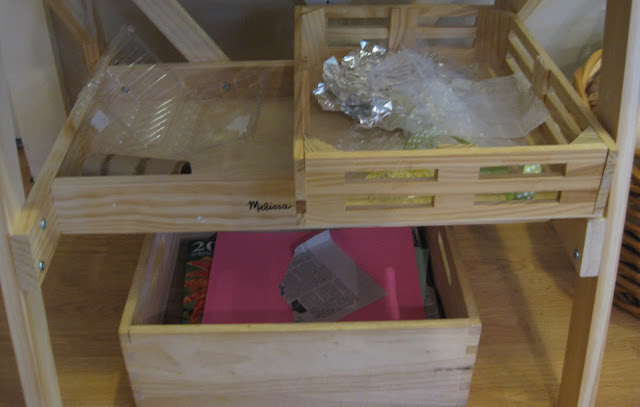 Below the work area is recycled cardboard, plastic containers, tin foil, cheesecloth, ribbon, and yarn.  And below that level are paper materials like magazines, colored paper, recycled envelopes, and newspaper. 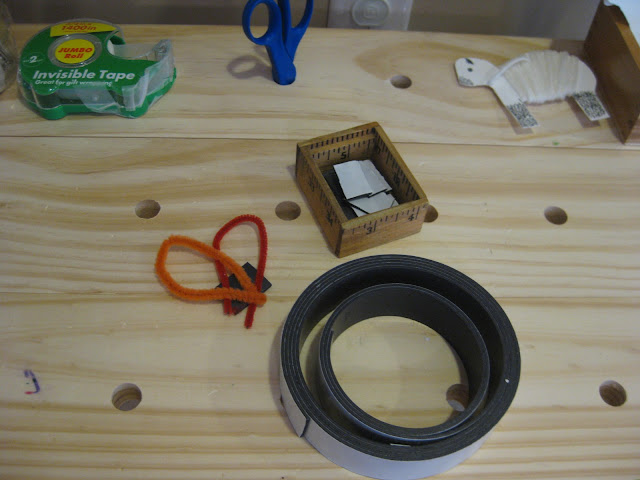 My daughters have really been enjoying the space.  Very popular right now, is the magnetic tape which is magnet on one side and sticky on the other.  I cut it into small pieces and keep it in a box.  They love making magnets for the fridge and even came up with the idea of pipe-cleaner magnetic hearts.
at 3/07/2013 33 comments:

Spring Bulbs and an Indoor Picnic 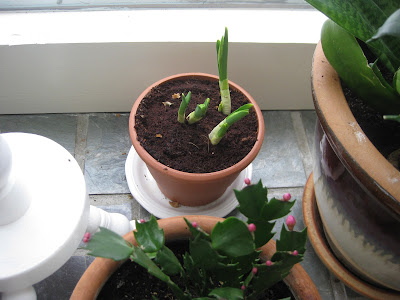 Each winter, around Christmas, many stores can be found selling flower bulbs.  I always buy some to give away as Christmas presents and to force bulbs in February at home.  We found a variety of bulbs at the hardware store and food store this year and I ended up buying more than usual. 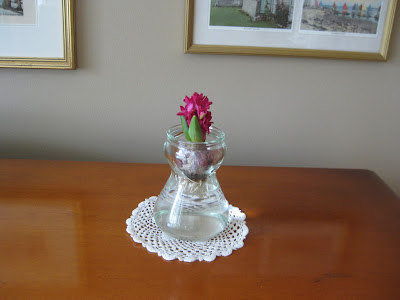 Some came with the special glass jar for holding the bulb.  It is a great way for children to watch the growing process- first with the roots and then the green shoot and last the flower.  My daughters get so excited to see the first sign of the blossom and what color it is. 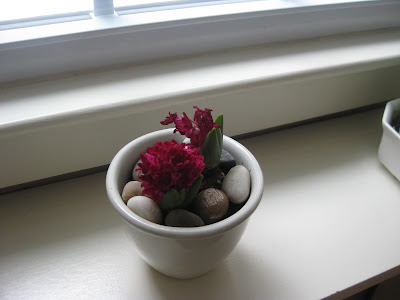 We planted these in soil and added rocks to the top. 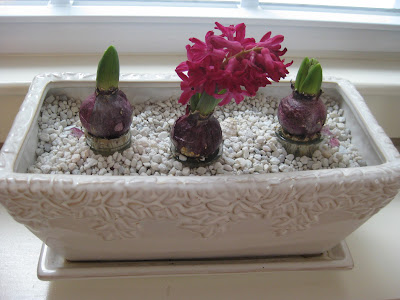 These are sitting on the top of spice jars and surrounded by gravel. 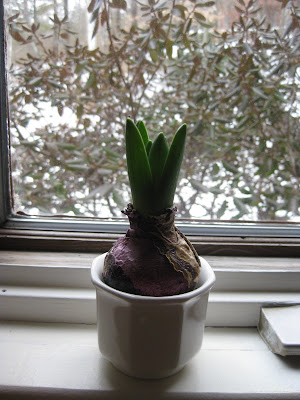 This little bulb is sitting on a rock inside the jar and the roots are submerged in water. Be careful not to let the bulb sit in water-it will rot- just the roots in water. 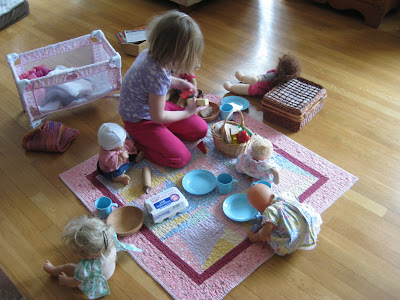 And for fun, a cute little photo of a recent indoor picnic- perhaps inspired by all the flowers?  It made me think that just a few props- blanket, picnic basket, play food and dishes can inspire great play.
at 2/23/2013 37 comments: 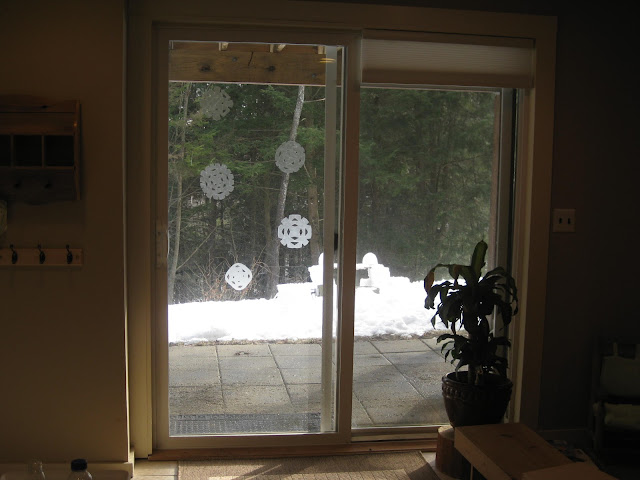 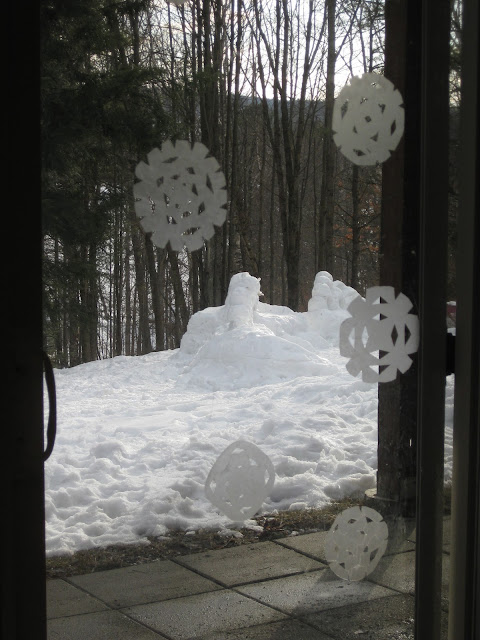 Cutting the folded contact paper was too difficult for my children to do, but they do enjoy seeing them on the glass. 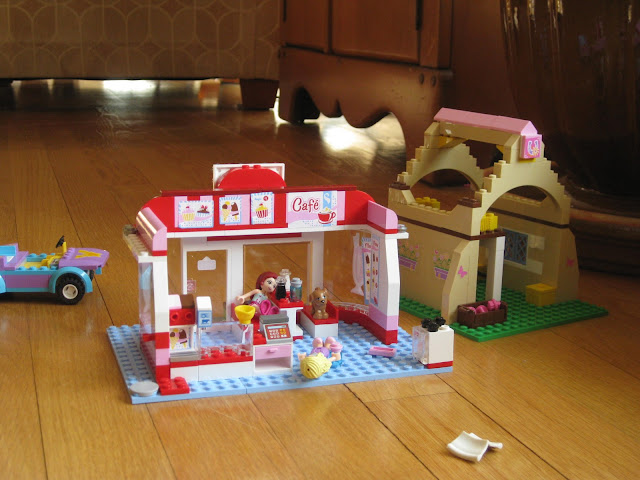 One afternoon my daughters spent a long time building with legos and blocks. They were so happily engaged.  My daughters love the Friends Legos and for Christmas got a few sets.   Legos are one of the few plastic toys I don't mind in the house. 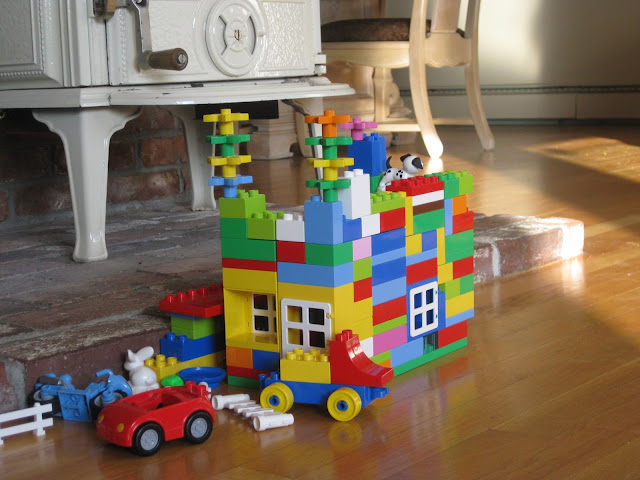 They still use the duplo legos as well.  They are great for starting lego play because the pieces are so big and easier to put together and take apart. 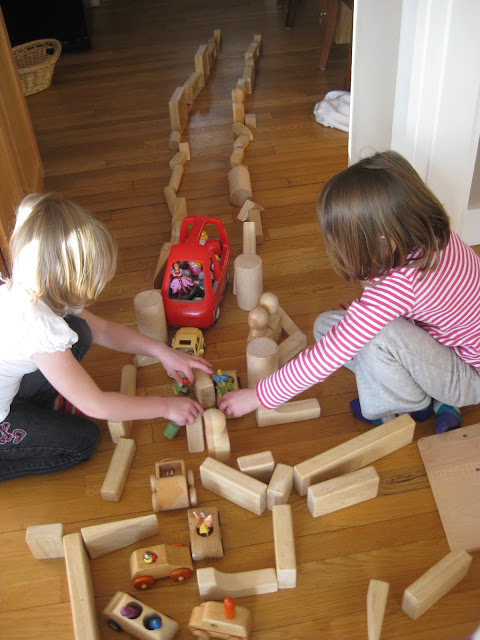 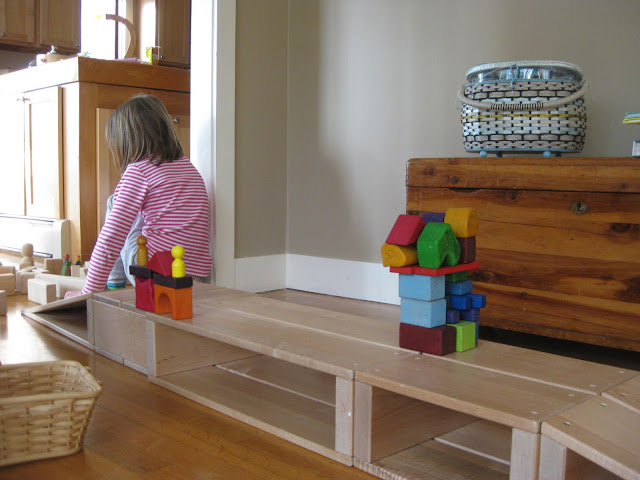 Today my youngest asked to play a game.  She got out the skip-bo cards but since I've never really played skip-bo,  we settled on playing go-fish with the cards instead. 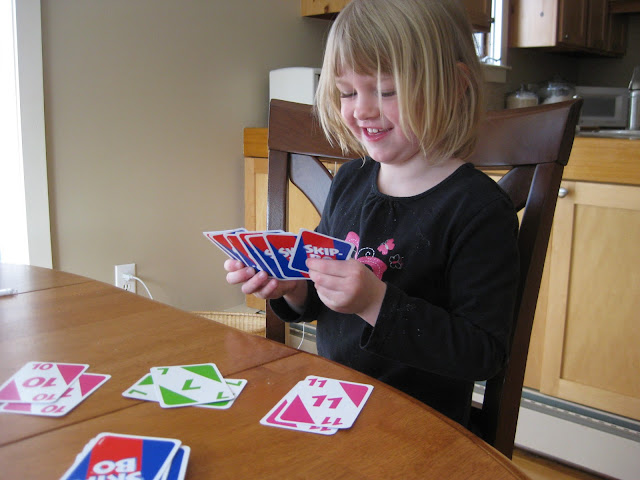 Playing the game reminded me how great Go-Fish is for practicing numerals and letters.  In fact, I'm thinking of making up one for practicing sight words. 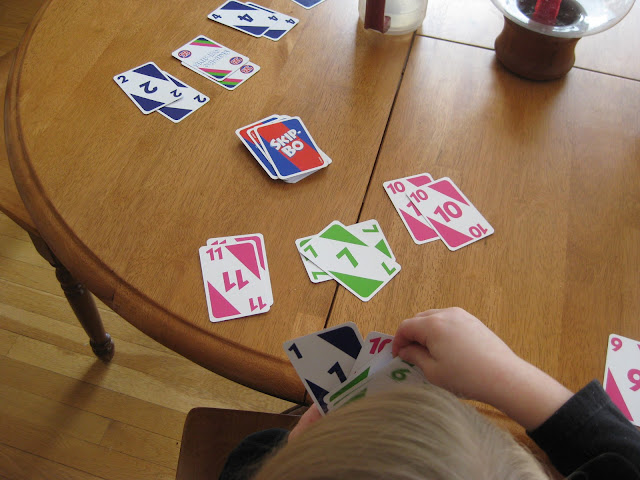 The skip-bo cards were actually pretty good for this game since the card is simple in appearance and font. She loved playing, so I know we'll be playing Go-Fish again soon, in some form or other.