I enjoy trying out new arts and crafts activities as much as my daughters do.  It is fun to experiment, learn new skills and take creative risks in this way.  I recently came across the book Soap Carving For Children of All Ages, and found it a great inspiration to give soap carving a try. 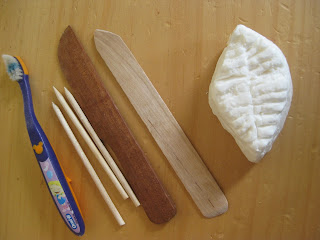 There are only a few supplies needed to soap carve and we made most of our own.  Ivory soap is best suited for carving (as the book says), it doesn't crumble like other soaps and since the company used to sponsor soap carving competitions they are like the official soap of soap carving! 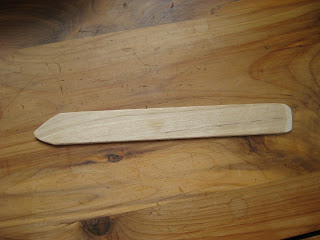 Making the Tools: One tool needed for carving is a knife type wooden stick for taking off the sides of the soap bar.  We made ours using a tongue depressor (or popsicle stick).  We formed the point by rubbing the sides of the stick against sand paper until it became pointed.  On the other end of the stick we made a chisel tool  by rubbing only the widest side against the sandpaper. (My daughters didn't use the chisel at all, but older children probably would.) 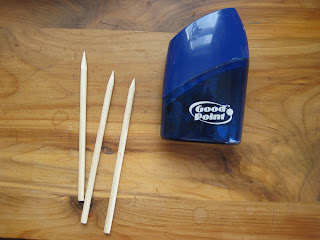 The second tool we made was like a spear, used for outlining the soap pattern and drawing details on the carving.  I found some small dowels in our craft box and we used a pencil sharpener to create the point. 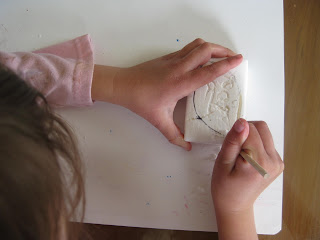 My oldest daughter decided to make a leaf, so I drew a leaf outline on her bar of soap with a permanent marker.  (My youngest daughter wanted a tree which proved unsuccessful and hence no photos of that.)  Choosing a doable pattern (or image) is the key to successful soap carving.  It is best to keep the image very simple.  Once the outline is drawn on the soap my daughter traced it with the "spear" tool, digging it into the soap to create the image.  The "ivory" lettering was removed by gently scraping the top. 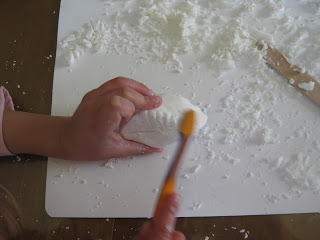 The "knife" tool is then used to take off small pieces around the outline.  Once my daughter understood that she wasn't trying to cut off large chunks, but shave off the sides instead, it was pretty easy.  The soap itself, is softer to carve than one would think, and it doesn't take long to have a pile of shaving at the work mat. (Which reminds me, I wasn't prepared for the amount of shavings, covering the table or doing this outside would be best.)  The toothbrush is useful to brush away shavings from the carving, and carving edges can be smoothed by rubbing fingers around the image. 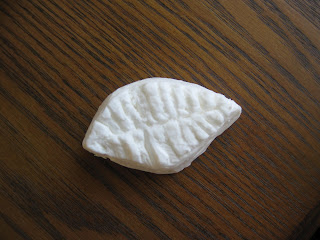 The finishing touch is adding the details, like the leaf veins, in this pattern.   Both of my daughters enjoyed the soap carving and we will surely do this again.  I gave it a try myself, earlier in the week, to test it as a possible craft and made this heart. 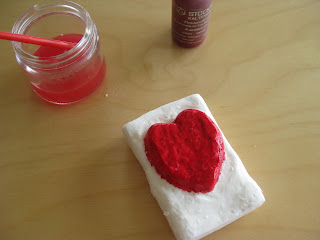 This idea comes from the book, and after the carving is done it was painted with watercolor paint mixed with a few drops of water.  I chose to not introduce the painting to my daughters so that they could use their soap, as soap, for washing.
at 4/19/2012

My son recently received a pocket knife for his birthday and has been obsessed with carving. Thanks so much for sharing this fun and much safer idea, and also for sharing your methods of making your own tools!

What a wonderful idea! And I could use the discarded shavings for laundry detergent mix...

This activity is beautiful and my son would really enjoy it. Thank you for sharing...

Thank you, but what kind of ivory soap should I use?

How fun! Have you tried glycerin soap? Can't wait to try it with my daughters. Thanks.

Thanks for sharing this. You inspired us to create our own tools!

Good day. I was very impressed with your wonderful article. I hope you can write more and inspire a lot of people . You can also visit my site if you have time. Thank you and Bless you always.

Do not use Irish Spring soap for this. Everything stinks for days afterwaeds

I know there will be many difficulties and challenges but I am determined to do it. If it does not succeed then it will be a lesson for me as well
catmario4.com