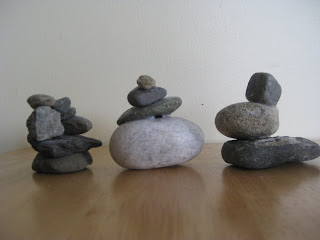 We always have a rock collection going on somewhere in the house. I wanted to use some of those rocks for a craft and came up with making rock sculptures. Sometimes when we are out in the woods on a trail we will come across a stack of rocks made by another hiker. The rocks are used as trail markers, the start of a trail or a fork in the trail, and can also be found at the top or peaks too. They are also referred to as cairns. Before starting this craft we went to the river to collect some flat rocks which would be good for stacking. 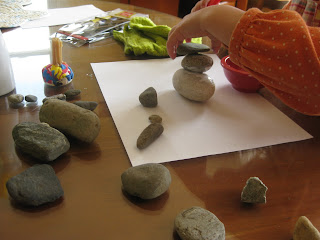 First they experimented with just stacking them. Which ones worked best for the base and which ones seemed to fit together better. 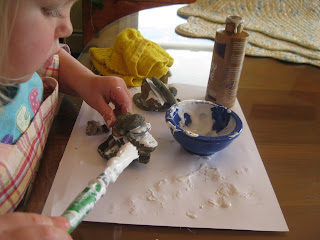 We used paint brushes and tacky (craft) glue. All that was needed was a lot of glue and a little patience. 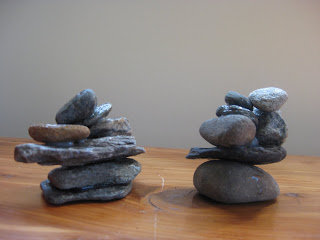 The glue held nicely after it dried. 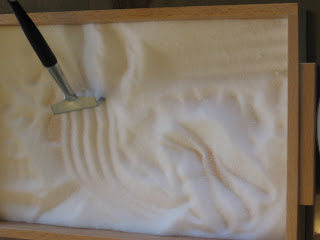 I put them in with a tray of salt for the girls to play with. We found a little rake to use. 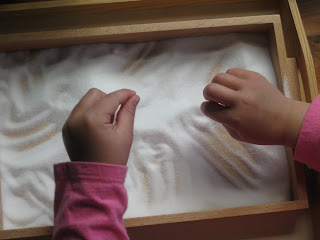 They love playing with the salt (although be sure your little ones don't have any cuts on fingers.) 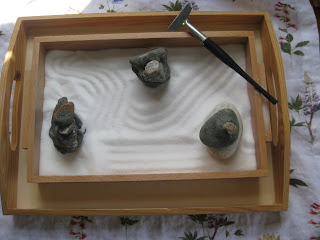 We called it our rock garden. I found the best way to contain the salt was a tray inside a tray and a cloth napkin under that.
at 5/06/2010

Well done, those came out beautifully! I really do envy you your woods and river, as we live in the city where space comes at a premium. The salt tray idea is brilliant and seeing as how a cold, wet winter has just started down here in Cape Town, South Africa, I definitely will be trying it with my two year old tomorrow.Thanks for the inspiration!

great idea, we will be trying this and I will be linking
Jo
http://themontessorigoldmine.blogspot.com/

What a lovely idea. I can imagine my children enjoying making this and also playing with it.

This is a fabulous idea, thanks for sharing.

I also have an award for you - http://ourworldwideclassroom.blogspot.com/2010/05/spreading-some-sunshine.html

What a fun project! I think my four-year-old would love choosing rocks for this and then being encouraged to use so much glue... :-)

I love this idea! My kids are forever collecting rocks... Unfortunately ours aren't this cute!

I've seen cairns for sale ($$$$) in catalogs. Never once thought to glue them together like that and we have a ton of river rocks we've brought inside from the beach. Great idea!!!!
Thanks.
:-)

Finally something to do with all our rocks! Can't wait to see what my kiddos create.

I love love LOVE your blog!

I have just recently decided to homeschool my 2 little boys (21 months & 3 years). I have read through your entire blog over the last few days and I want to do EVERY single activity with my boys!
Where do you get all your wonderful ideas from?
Thank you and I look forward to following your blog.