Introduction To The Solar System

An Introduction to the Solar System 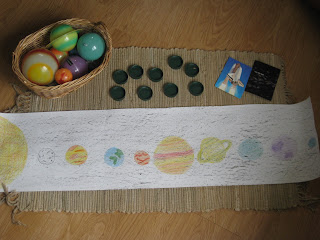 I should start off by saying, during my internship I did have not have any lesson plans for introducing the solar system. I am not very familiar with the Montessori lesson itself. I can remember seeing the materials out while passing through a room when an older child worked on it. With that said, this is as best as I remember the set up (more or less).

Because of the ongoing interest in the globe that we have been using in our room, I wanted to present a simple introduction to the solar system. And, now that my daughter's grandpa has a new telescope, I also felt it was the perfect time. 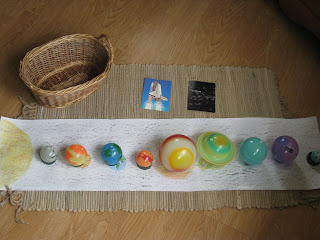 I purchased this solar system from Montessori 'N Such. It is meant to be used as a mobile but for now, we are using it this way. Using paper on a roll, I drew a sun and each planet to match the mobile planets. The cards are just for reference as I discussed how the planets would look if we were closer to them in a space shuttle. My daughter matches the planets to the drawings, where each planet sits in bottle lid so it doesn't roll off the paper. I spent a while looking for a Solar system song. I wanted something simple with only the names of the planets. I didn't find one so we sing this to the tune of Mary Had a Little Lamb:

Mercury, Venus Earth and Mars
With the stars, with the stars.
And there's Jupiter, Saturn too.
Uranus, Neptune, and Pluto. 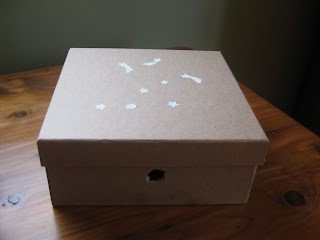 The mobile came with glow in the dark stars , moon, and planets. We put some on my daughter's ceiling of her bedroom and used the rest to make this looking box. 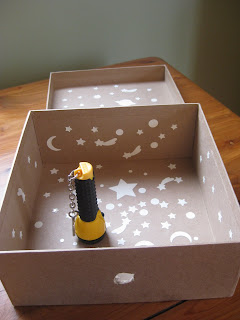 She opens the box, shines the flashlight on the stars, closes it and peeks through the hole. 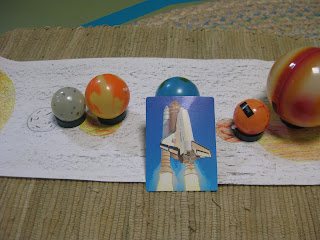 Now that we have been using the solar system models we have started to have some fun with them. Using the picture of the space shuttle, we start at earth. We have a count up (instead of a count down to practice counting) and when we get to 10 the shuttle is blasted off into space. While my daughter moves the card as if it is flying through the solar system, I am "mission control" and tell her what planet to visit. I add comments like "Mars, the red planet" or "it is too cold in Pluto, time to go to..." She also likes to pick where the shuttle will go and makes comments too. We always return to earth for landing when we are finished.
at 5/05/2009

What wonderful work! So beautifully presented & simple... & your drawing are brilliant.

I wish we had this on our shelf ;)

I had a look at the M'n'S site but postage to Australia is always a lot. We do have a solar system book with a mobile so I could use that (the planets are made of flat cardboard) but the 3d planets are so effective!

The song is great - I've sung it to myself already (!) and my boys would love that star box... Hmmm, a great excuse to buy some new torches which they would love also.

I know I'm gushing but thanks for all the inspiration & for sharing with us :)

Oh I LOVE that box. What a fun idea - she must love it.

What a great activity... I just discovered your blog and look forward to visiting often :)

Hi, looks like you are having a lot of fun :) I'm wondering about your decision to teach Pluto as a planet. I don't know if you know, but it isn't considered a planet (it is now a "dwarf planet") anymore by the scientific community. Not a crititism, I'm just curious as to your opinion :)

Here's wikipedias article on it if you are interested: http://en.wikipedia.org/wiki/Pluto

I hope its okay to share ideas...I have another great way to introduve the solar system. I use my nesting dolls & labels with pics. The largest nesting doll is the milky way (i know, so big), the next doll representss our solar system, the next being earth, the next, the continent...&so on. I guess it depends on the amount of nesting dolls you have. It's still interesting to show the child that we expand much bigger than where we live. Great blog, by the way! I've used some of your great ideas.

I love the stars looking box! What a wonderful idea :)

Wow, this is fabulous! You have so many amazing projects here! I'd love to link to your blog if you didn't mind!

We're making thumbprint heart magnets today to give the kids' grandmothers for Mother's Day. They are so cute and really easy to do (well, we haven't painted them yet but so far it's been a breeze!). And all three of the kids have thought it was fun, from the toddler to the preschooler. Thanks for such a great idea!

I am glad this post was useful for so many. Thanks for the comments. Tess- I included Pluto because it was included in the model set, which I have no idea when it was made. I have read lots of debate about the subject of Pluto: planet/not planet, counted or not counted. (I will visit your link next). Since it is in our solar system regardless, and part of the model, I think it is worthy of presentation. Thanks to your comment, it is something I will mention to my daughter, who has a special interest in Pluto already because of it's size. Rachel@oneprettything: A link would be great. I have looked at your site often. I welcome any links as long as they are appropriately used.

Seriously amazing project... I'd be honored if you would post it on my 'Friday's Nature Table' post for today.
Blessings and magic.

Hello! I am working on an article for iVillage about cardboard-box crafts and we are considering your photo of the cool stars-and-moon looking box for the upcoming slideshow. May we have permission to use this photo? Could you send me a high-res version and the photo credit? Thanks! Ellen Niz, IVillage contributor, ellen.niz(at)gmail.com